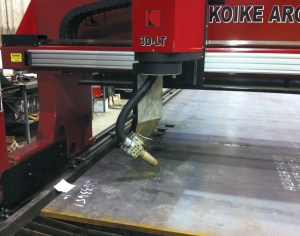 There was nothing wrong with the old machine. In fact, it wasn’t even that old—Guelph, ON-based AWC Manufacturing Inc.’s first plasma burner, a Koike Mastergraph II, had been purchased just six years earlier.

The problem was with the ‘horse collars’ AWC was making for Komatsu Mining. Since the Mastergraph only burns vertical I-cuts, the Ontario fabricator was spending $275 apiece to have a local machine shop bevel the big U-shaped parts. Operations manager Don Savage explains: “at that time, we had a 20-year old machine that we’d retrofitted with a plasma head and an NC controller. So for most of our work we’d burn everything on the Mastergraph and then use the old retrofit machine for beveling. But the horse collar has so many large arcs and complex bevels there was no way we could do it in-house.”

The subcontracting for that one part alone was costing AWC over $150K annually. Adding insult to injury, their homemade beveling machine was on its last legs. “The drives and the controller were breaking down a lot and we were getting nervous. The beveling for the horse collars was under control (at a cost), but there were also many other parts for Komatsu, as well as outriggers and upper frames for Link-Belt and axles for Hitachi. All of these require beveling, as do most of our commodity parts.” Savage says the machine shop route was too expensive, so AWC tried sending some of its more complex work out for plasma beveling at some of the local plate houses. “They couldn’t hold the tolerances we required. That’s when we called Linde.”