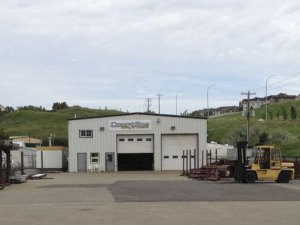 If you’re tired of driving all the way into downtown Calgary for some welding rod or a refill on your acetylene tanks, give David Culbert a call. He’s the president of Coastline Welding and Fabrication Co. in Okotoks, AB, a welding supply store and full-service fabrication shop half an hour south of the city. “There are a whole bunch of small shops and mobile welders in this area,” Culbert says. “Until we began distributing gas and consumables, those guys had to drive into town. Now they can get their stuff locally. It’s been good for everyone.”

As a CWB 47.1 certified welding shop, Coastline is likely its own biggest customer. When they’re not selling supplies, Culbert and his team service Alberta’s booming oil and gas industry, manufacturing a variety of products including well-service equipment, buncher and skidder components, and oilfield centrifuge stands and related equipment used to separate the mud used in drilling operations.

Coastline also does work on commercial buildings, structural steel, aluminum fabrication and heavy plate processing. One of the company’s recent jobs was the Canexus railcar expansion in Bruderheim, a project that Culbert says used over 150 tons of steel and most of last summer to complete.

This isn’t Culbert’s first time at the helm. Beginning in 2002, he owned and operated 3D Industries, a welding shop in neighbouring High River. But when the economy tipped downwards in 2010, he and now partner Dennis Brown joined forces, merging their two businesses together. Culbert says the decision made good sense. “Dennis was doing the same kind of work, so partnering up eased the load on both of us.”

Culbert supplied most of the new shop’s welding equipment, but he and Brown immediately beefed up their fabricating capability by purchasing a 200-tonne CNC brake press and a 10 ft CNC shear, both from Allsteel. And early in 2013 they ditched their old plasma table in favour of a 2100 mm x 4900 mm (7 x 16 ft) Maxiem 2040 waterjet table from OMAX.