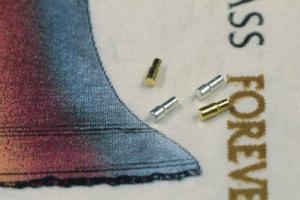 Cold-formed parts are common. A visit to a hardware store’s fastener section reveals numerous examples, including screws, nuts, bolts, rivets and nails. But far more than just fasteners are cold-formed. The process is pushing the manufacturing envelope for creating parts—including many microscale ones—that are impractical or nearly impossible to make by other methods.

Cold forming involves feeding wire or round stock, typically from a spool, into a high-speed, single- or multiple-station, automated reciprocating machine. The machine shears off a small portion of the raw material to create a blank with the same volume as the finished part. Then, via a set of feed fingers, a pick-and-place attachment or a die, the machine feeds the blank into a series of horizontal punch and die sets, which progressively “spank” it—at a rate of one hit per station—into the correct shape.

This multistep process can involve numerous operations, such as coining, piercing, extruding, shearing, trimming, threading and knurling. With a few exceptions, any operation that can be performed on a lathe or mill can be cold-formed.

Similar to squeezing toothpaste from a tube, cold forming forces brass, copper, steel and even difficult-to-machine materials such as Inconel, tantalum and molybdenum into each successive die cavity. At each step, the material takes the mirror shape of the station’s die before moving to the next station.