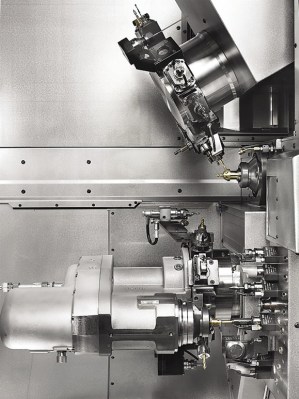 While the basic CNC lathe is still a standby in many machine shops, new technology has vastly expanded turning capabilities. For example, live tooling and multiple turrets turn a basic lathe into a multitasking productivity center. When equipped with a large automatic toolchanger, these machines can hold tools for dozens of jobs, reduce setup time, and turn, mill, drill and finish parts in a single setup.

Dual-spindle turning centers can turn both ends of a part in a single setup to minimize operator handling, increase throughput and reduce work-in-process. The opposed spindles support synchronized turning and pass off parts on the fly, reducing overall cycle time. Such machines allow for the creation of more complex parts, and do so more efficiently. But questions like when are such machines needed, what kinds of parts can they produce and how do you justify the increased cost of a “supermachine” should all be taken into consideration before signing on the dotted line.

Eliminating as many operations as possible is the most important consideration for shops looking at a new machine tool, according to Courtney Ortner, chief marketing officer for Lorain, Ohio-based Absolute Machine Tools Inc. “This is why multitasking machines can be so profitable,” she said. “Parts are often ‘done in one,’ eliminating work-in-process and improving quality.”

Ortner argued that turn/mill and other multitask machines reduce setup and fixturing costs while improving employee utilization compared to single-task machines. That’s because with multiple operations, operators do non-value-added tasks, such as part handling, which removes them from the equipment they are supposed to be monitoring and increases downtime. “An idle spindle is no different than going to the front door and throwing money into the wind,” she said. “Because more machining is done per cycle, multitask machines maintain a higher percentage of spindle uptime.”