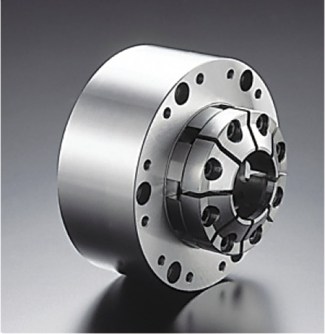 When I was working in a machine shop in 1981, Vern moved me from hand screws to NC lathes. My first task there was turning Inconel stator rings. “This’ll give you something to cut your teeth on,” he said, laughing.

Thin like a slice off a soup can, the rings required a 0.001″ tolerance on the bore and concentricity of half that for the chucking diameter. After 2 days and a box of scrap parts, I convinced Vern that collets and 3-jaw chucks weren’t going to cut the mustard and got him to spend $5,000 on an air chuck and a set of pie jaws. Boy, did he gripe about the price.

With the air chuck, the tolerances became manageable, but barely—triangulation remained a problem no matter how accurately I bored the jaws and the chuck would start to open around 2,000 rpm, so I never could achieve the spindle speeds I wanted. The good news is Vern gave me a nice raise.

In hindsight, a diaphragm chuck would have been a better solution. Lee Flick, vice president of workholding supplier Pioneer N.A., Elk Grove Village, Ill., said diaphragm chucks are ideal for parts like these. “The advantage is very accurate control of clamping pressure. You can grab thin-walled parts or delicate materials, such as glass or plastic, without damaging the workpiece,” he said.

Flick explained that diaphragm chucks use an expanding gland. This means there are no sliding parts as in a conventional chuck. Imagine bolting a set of jaws to the face of a steel pie tin. When you push on the opposite side of the tin, right at the center, the jaws open. Load a part, release the pressure and the metal returns to its original shape, thus securing the workpiece (see diagram below).

Granted, the actual mechanism is more complex than our pie tin example, but the lesson is that diaphragm chucks are repeatable and accurate—runout of 0.00002 ” is typical. And because the business end of a diaphragm chuck is smooth, there are no nooks and crannies where bits of metal or grinding grit can hide, making them ideal for abrasive environments, such as grinding and hard turning.