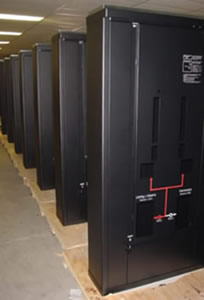 Ask Bob Evans, General Manager of EVS Metal’s Texas facility, about the poor economy and you might be surprised by his answer. “We’ve had record sales the past three years,” says Evans. In fact, EVS has done so well they’ve recently increased capacity by adding new equipment and expanding their facilities – within the past year alone they’ve increased manufacturing space by over 45,000 feet.

That’s not to say they’re unaware of the recession – just that it has little effect on them. “We see a lot of shops that are hurting. I get auction letters almost every day, from all over theU.S.– in the past ten years or so, I know of seven or eight shops that have failed in theAustinarea alone.” And yet, EVS is thriving, despite these sobering statistics. What’s their secret?

For starters, EVS Metal believes in the importance of investment – they continue to purchase state of the art equipment, despite the apparent decline inU.S.manufacturing. “I’m still optimistic about the industry,’ says Evans. “Sure, there are fewer shops than there were in the 90’s, but the ones that are left have no choice but to invest in new technology. You can’t be scared of the economy.”

It’s evident that EVS Metals isn’t scared of much. Just last year they dropped nearly $500K on an Amada FOM 2NT laser with an automated material handling system. There are a lot of good lasers out there; why’d they go with Amada? “We chose the new machine based on three criteria,” explains Joe Amico, V.P. of EVS Metal’s corporate site inNew Jersey, “Price, features, and speed.”

This isn’t their first rodeo. “We went through the same selection process back in 2008,” says Amico. At that time, they were looking to trade in two older lasers for one with automation. “We didn’t want the machine sitting idle while we were unloading parts. With a material handling system, you can get the next sheet up on the table right away and keep cutting.”