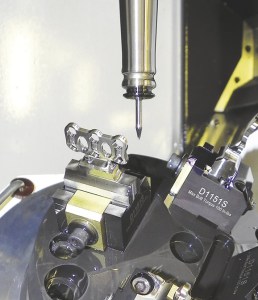 Tim St. Martin knew there had to be a better way of fixturing parts on his company’s 5-axis machine tools. “We’d visited some of our suppliers and saw how they were holding parts on their 5-axis machines,” said the senior manager of manufacturing engineering for Carlsbad, Calif.-based orthopedic implant manufacturer Alphatec Spine Inc. “They were mounting the blanks into a ‘picture frame’ and then screwing that frame to a tombstone-mounted fixture. This basically limited access to one side of the workpiece per operation. Many in our company thought we should hold them the same way.”

Management charged St. Martin with finding the most effective way to produce a family of titanium spine plates. Alphatec had purchased a pair of 42,000-rpm Mikron HSM 400U LP 5-axis machining centers to bring machining of its Trestle-Luxe anterior cervical plating system in-house.

In particular, Alphatec needed an optimal way to fixture the parts because it would be making a family of 33 different part numbers with production volumes of more than 1,700 pieces per month. While the company considered making its own fixtures, contacts at GF AgieCharmilles, builder of the Mikron machines, suggested Alphatec look at workholding from 5th Axis Fixtures Inc., San Diego, which specializes in workholders for 5-axis machines.