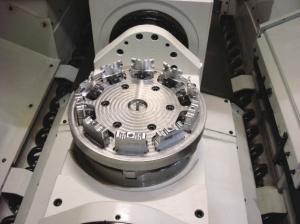 Since the dawn of CNC milling, machinists have been trying to squeeze more parts onto the table and position them quicker. That’s because to a machinist, it’s all about reducing setup time and cranking out more parts per hour.

There are many ways to achieve this, but for shops still relying on the old tried, true and blue 6″ machinist vise for workholding, the only option is to cram as many vises on the table as possible. On a typical 20″×40″ machine, this means a maximum of four vises. For small lot sizes, this might be OK, but it’s not very productive. And while it’s possible to double up and clamp two smaller workpieces in a 6″ vise, it’s not advisable because parts can come loose during machining and fly across the shop unexpectedly if there’s variability in part size. The good news is there are better ways of gripping parts.

Twin vises have been around for a long time, and many companies make them. The various offerings allow a user to safely hold two parts per vise using hardened and ground step jaws for first-operation work, or machinable aluminum top jaws for secondary operations. These vises cost about twice as much as an old-fashioned machinist vise but are typically more accurate and have a smaller footprint. That enables placing up to half a dozen 6″ twin vises on that 20″×40″ machine, or 12 parts per cycle.

One company offering a unique twist on the twin-vise concept is Dapra Corp., Bloomfield, Conn., exclusive distributor of the German-made Allmatic Duo vise. Matt Milhomens, inside technical sales at Dapra, said, “We’re focused on supplying high-precision, quality vises to the machine tool industry, and offerng something different than other twin vises. With the Duo, the outer jaws are fixed, and the two center jaws move toward the outside.” And because one jaw makes contact first, the operator doesn’t have to attempt holding two parts in the vise while simultaneously cranking it shut—unless you have three hands, this is never an easy task.