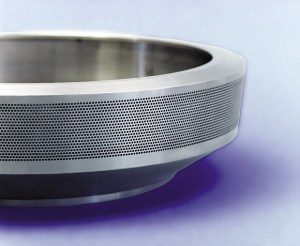 If you have a few million tiny holes to drill, you could order up a tractor-trailer’s worth of circuit board drills and get to work. You might be done by Christmas. Or you could contract with one of a handful of shops that owns an electron beam drilling machine and get those holes drilled before lunch. That’s because EBDs are faster than an overachieving woodpecker, punching holes in virtually any metal at speed upwards of 2,000 holes per second.

“EBDing works off the same principle as an old-fashioned, tube-style television set, using a stream of accelerated electrons to do the work,” he said. This isn’t like watching a “Leave it to Beaver” rerun, however. With a voltage of 120kW, an EBD generates roughly 1,000 times more power than an old black-and-white—a TV like this would cook its audience before the opening scene.

Like the cathode-ray tube in that tired Motorola, an EBD gets its mojo by electrically heating a cathode, which responds by emitting a cloud of electrons. This cloud is then accelerated with a bias voltage and the resultant beam is shaped through a series of electromagnetic lenses and directed at the workpiece (see graphic on page 98). When the beam hits, the atomic particles plow into the workpiece at two-thirds the speed of light, superheating the material to 2,700° C (4,892° F).