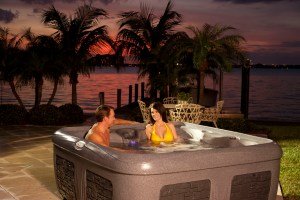 When baby boomers were thirty-somethings, spas were considered status symbols. Today, as these children of the Cuban missile crisis and “I Like Ike” campaign buttons become AARP members, they grow less concerned with what their neighbors think and more concerned with their aching backs.

The spa industry is slowly taking notice, modifying their sales and manufacturing tactics to meet the needs of an aging demographic. This means an emphasis on the health benefits of hydrotherapy and improved spa accessibility, as well as marketing campaigns that feature physically fit seniors and their smiling grandchildren. It’s a huge market populated with largely affluent prospects, many of whom are first-time spa buyers.

Wright explains that, as the baby-boom population cycles through retirement, it’s only natural that hydrotherapy and health-related features begin to take greater importance in the decision-making process of these spa purchasers. Industry reports have indicated this demographic trend for a number of years now, but it wasn’t until fairly recently that Dream Maker Spas began to target its rotomolded spas at this age group.

“This ‘old-school’ way of thinking had us marketing what were traditionally considered starter spas to younger buyers of modest means,” Wright says. “Thanks to advances in rotomold-making techniques, modern design capabilities, smart engineering and a revolutionary marketing strategy, Dream Maker Spas is experiencing a new, more mature client.”