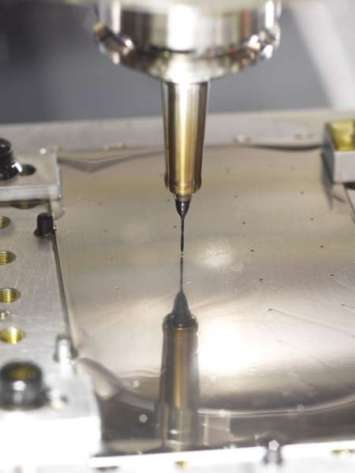 Without micromachining, we’d still be watching the Red Green Show on tube-style TV sets and calling Aunt Emma on a rotary dialer to discuss the family reunion. Contact lenses wouldn’t exist, smart devices would be dumb, computers would be the size of a house. But what is micromachining, and how does it differ from hogging out a block of 6061-T6 aluminum, or ploughing a hole big enough for a golf ball in a chunk of tool steel?

John Bradford, micromachining R&D team leader at Makino Inc., Auburn Hills, MI, defines it in several ways. “The first element is size. Any part or part feature 1 mm (0.0393 in.) or smaller is considered a micromachining application. Secondly, there’s surface roughness. A part may measure 300 mm square (12 in.), but require 0.1 micron Ra or better surface finish; that’s also micromachining. Lastly comes accuracy—location of a part feature relative to a datum or other feature to a tolerance of +/- 3 microns (0.00012 in.) is the third element of micromachining.”

Micromachining requires far more than tiny endmills and good eyesight. It takes ultra-accurate cutting tools and holders capable of near zero runout. Nor will any old milling machine work when interpolating pockets smaller than a bee’s knee. Bradford says there are a number of machine tool features necessary for milling microparts.

Plenty of spindle rpm is clearly high on the shopping list for micromachining, as is an HSK or comparably precise spindle interface. And with the accuracy requirements Bradford describes, a motion control system with sufficient resolution for micro-scale interpolation is critical. Yet those attributes mean little without stability. “Starting from the standpoint of machine design and construction, micromilling processes require a very high level of thermal stability,” Bradford explains. “Without this, you’ll be unable to attain high repeatability when you have to make a second part, a third part, or a hundredth part.”