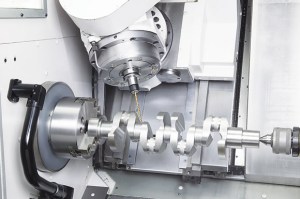 The simplest definition of multitasking is “the performance of multiple tasks at one time.” In the world of machine tools, however, multitasking takes on a far more dynamic meaning. Simultaneous turning operations, machining multiple part surfaces and combining several manufacturing operations into a single setup are just a few of multitasking’s many flavors.

If it sounds like yesterday’s news, that’s because lathes with live tooling have been around for decades, and multispindle mills are older than the surviving members of The Beatles. Well, these are not your father’s multitask machines.

Builders are delivering all-in-one machines in mind-blowing configurations: twin-spindle, three-turret lathes with automatic toolchangers; machining centers with more degrees of freedom than a pogoball; and hybrid units that are neither a lathe nor a mill.

These multitaskers can do things only hinted at 30 years ago, with capabilities such as pinch milling, gear cutting and cylindrical grinding. As a result, many shops are reexamining the status quo. Multitasking presents a new paradigm in manufacturing, one that drastically reduces cost per part while raising the bar on productivity and quality.