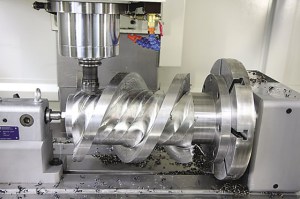 Tired of your wimpy 5C indexer or NC rotary table giving up its position faster than a politician after an election? Maybe it’s time to supersize that commodity indexer. Doing so will produce more parts in less time, with better part quality to boot.

Lee Flick, vice president at workholding supplier Pioneer N.A., Elk Grove Village, Ill., said successful machining on an indexer is all about clamping torque. “Many of our customers come to us after they’ve purchased an inexpensive indexer elsewhere. They mount it to their machine and start cutting as if the part was clamped directly to the machine table, then have to back off when the indexer starts moving on them.”

According to Flick, higher clamping torque allows shops to machine at a more efficient rate, often doubling or tripling output. Better yet, the 33 percent cost delta between a ho-hum 8 ” indexer at $15,000 and one for $20,000 that hits a home run each time at bat is not that great. “The extra investment will give you over 400 ft. lbs. of clamping torque, roughly four times that of a low-cost table,” he said.

Maybe that doesn’t matter if all the jobs involve light-duty machining close to the centerline of the table, where cutting forces have little leverage, but that’s rarely the case. “The majority of machining in the U.S. is done in job shops,” Flick said. “One day they’ll mount a 50-lb. workpiece on an indexer and hog with a 1 ” rougher, the next day load up a four-sided tombstone with 10 parts per side and let it run for hours unattended. You need an indexer that can handle whatever you throw at it.”

If a rotary table shifts during machining, it can result in broken cutters and scrapped parts. How that indexer gets into position, however, is just as important as holding it there once it arrives. Chris Salamone, sales manager for Ramsey, N.J.-based Indexing Technologies Inc., explained two drive mechanisms are available for most rotary tables and indexers.