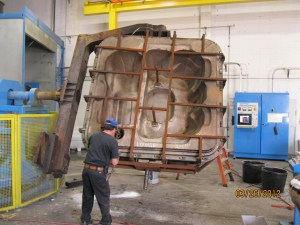 Rotational molding was invented in the mid-1800s as a means of producing hollow objects with consistent wall thicknesses. Since then, the process has been used to make everything from playground equipment to artillery shells.

Today’s molds are filled with polyethylene powder the consistency of granulated sugar (the stuff plastic soda bottles are made of), then the mold is closed and heated in an oven. The heating and cooling process uses a machine that resembles the Tilt-A-Whirl at the county fair.

You wouldn’t want a ticket to this amusement park ride, however. With typical rototub oven cycle times of 15-20 minutes and temperatures exceeding 600 degrees Fahrenheit, this is an experience even the most seasoned fairgoer should avoid.

“In a production situation, you’ll have one or even two spas sitting on each arm. While one’s cooking in the oven, there’s another sitting in the precool station, one at the water tower for final cooling, and on the other side, workers are loading and unloading product. So every time the machine indexes, you’re getting at least one spa shell. You can’t do that with traditional fiberglass or acrylic layups.”

Want to get yourself some of that? Covington would love to sell you a rotomold machine, but you’d better have deep pockets. A large model of a fully equipped four-arm machine described above will cost upwards of $500K, and that’s just the beginning. Aside from the machine itself, each spa model also requires its own aluminum mold.

“Spa molds can get pretty expensive,” he says. “The building process starts with a wooden pattern in the shape of the spa, which is used to make a sand pattern. That gets filled with aluminum, and then you have to polish it, frame it for the machine, and so on. You can figure 50 percent or more of the investment cost goes towards tooling.”