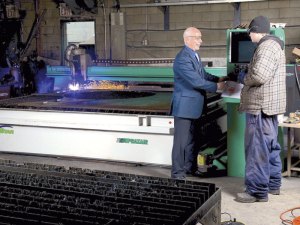 Eric Taylor doesn’t like to say no. As president of Valley Cut Steel in Surrey, BC, he takes pride in providing the best customer service he possibly can. “I used to work on the sales desk at a large service centre,” explains Taylor. “I found myself saying no to a lot of customers, and saw the need then for a small, flexible shop that would provide service the big guys could not.” In 1998, that vision became reality. Taylor opened the doors on a 232 sq m (2500 sq ft) facility, and then doubled it a few years later. “We have 14 people on board today, all of them focused on making our customers happy. Our shop mantra is Find a Way to Say YES.”

Valley Cut Steel offers a number of plate processing services, including flame cutting, forming, rolling, weld prep and beveling. It’s built a reputation on difficult jobs and rush orders, the sort of work Taylor’s former employer would turn down quicker than Mayor Ford’s temper after a night on King Street. But over the past couple of years, Taylor recognized a big shortcoming in his shops’s capabilities. “Most of our cutting has always been done in house on our oxy-fuel machines, but for anything under 3/8 in. [9.5 mm] thick, we’ve had to subcontract it to a plasma or laser house.”

As Taylor explains, this is because oxy-fuel produces poor edge quality and unacceptable accuracy on thinner gauge materials, as well as warpage and a large amount of slag that must be removed by grinding. Worse, sending work to potential competitors was risky, and the added delay and cost made it more difficult to win some business. “We recognized a lack of plasma capacity was holding us back. Buying a machine of our own meant it would be that much easier to say yes.”