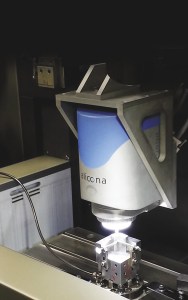 Replacing bulky, hot-running power supplies with cooler, smaller and higher efficiency ones is a big step forward in sinker EDMing, according to Steve Bond, EDM products national sales manager for Methods Machine Tools Inc., Sudbury, Mass. He explained how sinker customers are demanding smaller machine footprints and better performance at a lower cost, demands that are being met by machine builders like Exeron GmbH, Oberndorf, Germany. Methods is the distributor of Exeron sinker EDMs in North America.

“Power supplies on die sinkers have traditionally been bulky,” Bond said. “They’ve had large footprints and developed a great deal of heat within the power supply cabinet during the eroding process. Over time, this heat weakens the board components and reduces the efficiency of the power supply. As most EDM operators know, any change in the power supply can result in slower burning and reduced finishes. Consistency in power output is critical to the erosion process.”

Rather than continue to use fans and heat exchangers to cool the power supply, both of which allow air and therefore contaminants to enter the electronics cabinet, Exeron developed its liquid-cooled exopuls+ power supply. The compact power unit is about the size of a laptop computer, but capable of generating the same amperage as older, larger power generation boards.