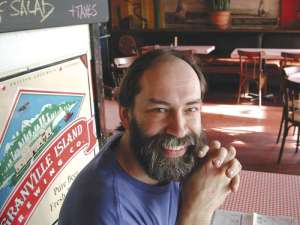 Marcus Carius has made a name for himself as the go-to guy for the weird and difficult. Whether its dental implants for dogs, precision components for cyclotrons, complex plastic injection moulds, microsurgical instruments, or custom sex toys, the owner of Implant Mechanix is the catchall for work that others can’t do or don’t want.

His shop is likewise an eclectic mix of machine tools. A 2011 CHMER wire EDM machine sits in the corner alongside an old Hansvedt CNC sinker, not too far away from a Defiance VTX-1 benchtop milling machine. There’s a Prodigy CNC gang style lathe and a Haas Mini Mill. Add to this a broad assortment of manual equipment—a turret mill, Monarch engine lathe, a couple of grinders, even a laser welding machine—and Carius can tackle most anything that fits through the door.

Until now, it’s been a small door. Since opening Implant Mechanix Inc., Carius has been machining parts in a space smaller than many people’s apartments. With a shop this size, he jokes that it’s always been easy to sweep the floors, assuming he has the time—fortunately for him, he’s generally been too busy to do so.

Not too long ago, however, the city of Vancouver decided to raze his building to make room for condominiums. Carius relocated the shop an hour east of downtown Vancouver. “It’s a mixed blessing,” he says. “I pay less money for nearly three times the square footage, but I can’t ride my bike to work anymore.”

With all that space, Carius has his sights set on some new equipment. While he can hold a “tenth or two” in a pinch, he admits it takes some babysitting, and would like equipment with much higher spindle speeds and better motion control. “I want way better accuracy than what I have now. That’s becoming more and more important for the work we’re trying to do.”