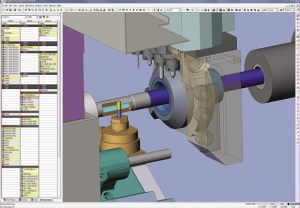 As CNC machine tools become increasingly complex, so does the job of programming them. CNC Swiss-style machines are no exception. With more tools than the Snap-On truck and tighter quarters than a World War II submarine, many shops view them as coding nightmares.

Yet the bane of these machines—their complexity—is often a boon. With stations aplenty, it’s likely that some of the needed tools already reside in one of the machine’s many turrets or slides, reducing setup time. Because the parts made on a Swiss-style machine are relatively small, stock removal is minimal—program a single pass and you’re done. And Swiss-style machine builders have incorporated cool features, such as synchronization codes and automatic axis mirroring into their machine controls, simplifying manual programming.

An experienced Swiss setup person can often program at the machine and have the first part in inspection faster than programming it in a CAM system, according to Brian Such, an Elk Grove Village, Ill.-based customer support group manager for machine builder Marubeni Citizen-Cincom Inc., Allendale, N.J. “In many shops, the parts are pretty straightforward, so programming means turn, drill and cut off,” he said. “It’s not that difficult.”

Despite his hands-on perspective, Such warned that traditional programming tasks are changing. As shops become more diverse in terms of machine capability, manual programming methods may be going the way of paper tape.

“The whole world wants to go CAM, and our customers are increasingly looking for people who can go cross-platform,” Such said. This means some underpaid soul has to program Swiss-style machines one day, wire EDMs the next and 5-axis machining centers after that. Programmers often multitask more than the machine tools they program.