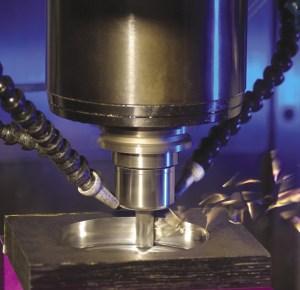 When it comes to speed, the RampMill is a top performer, according to Aaron Fike, sales and marketing manager of toolmaker SwiftCARBCNC, Kent, Wash. In pocketing applications when cutting difficult-to-machine materials like titanium, Inconel and tool steel, Fike said his tool cuts faster than the competition’s. “We’ve done extensive testing with the RampMill. Apples to apples, we pocket five to 10 times faster than anyone in difficult materials.”

Even in less demanding materials, the RampMill performs well. Merrill Kincade, senior programmer at fitness equipment manufacturer Precor, Woodinville, Wash., explained how his company was able to increase production rates nearly 50 percent when machining an aluminum extrusion. “Previously, we were roughing and semifinishing a 1.574 “-dia. × 1.315 “-deep through-hole using three tools: a 1¼ ” indexable-insert drill; a 1 “, 4-flute endmill; and an indexable twin cutter. One ¾ ” RampMill replaced all that, and our output went from just over eight cycles per shift to 12.”

RampMill is an endmill that isn’t an endmill, according to Fike. “Take a typical milling job in Ti6Al-4V, for example,” he said. “Using a conventional endmill, ramping at an angle of more than 0.75° in titanium is not practical, whereas we ramp routinely at 7° in titanium, nearly 10 times the maximum angle of an endmill, and at higher feeds and speeds. The RampMill can helically interpolate 20 to 30 times faster than an endmill.”

RampMill has more than 1,000 patent-pending design claims, including unique geometric features, through-coolant and a proprietary coating, according to Fike. “The only thing that the RampMill and an endmill have in common is that both can do side milling,” he said.