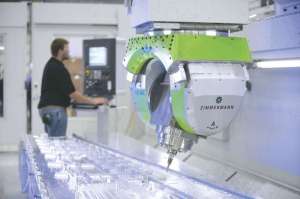 For those too young to remember, mechanical cams were once used to control automated machine tools. Cams gradually gave way to electronics though, and by the mid-70s, toolmakers were learning how to program, giving up their shapers and bastard cut files in favor of Teletype machines.

These crude devices turned hand-typed instructions into a series of Morse code-like holes running down the length of a 1″ wide spool of paper, one frequently long enough to traverse the length of the shop and out the shipping door. Machine controllers with all the intelligence of a vintage Pac-Man game would then interpret these holes—or their absence—as the 1s and 0s needed to communicate with any digital device. Numerical Control (NC) was born.

Answer the question
The next generation of machine controls made its debut on the manufacturing floor around the time Canadian Prime Minister Pierre Trudeau was contemplating his retirement plan, and by the late 80s, paper tape had largely gone the way of the slide rule. NC had evolved into CNC, the primary differences being onboard program storage, a CRT display and canned cycles designed to make machine programming simpler.

Like all things electronic, CNCs grew faster and more capable as the decades passed, and today’s machine controls are super-smart multitaskers that resemble those old tape machines like a smart phone compares to a rotary dialer. Modern controls boast data processing times best measured in nanoseconds, on-board program storage sufficient to handle the largest of files, and the ability to manage more simultaneous axes than players on a football pitch.

Machine builders have capitalized on this advanced control capability by adding their own proprietary software to otherwise standard controls—DMG MORI has its CELOS system, Mazak offers Matrix and Mazatrol SmoothX technology which debuted at IMTS, and Okuma has THINC-OSP. All are intended to make part programming easier, increase integration to third party systems and extend machine capabilities.