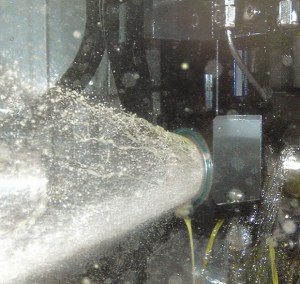 Ever since British machine inventor Henry Maudslay introduced the first modern screw-cutting lathe towards the end of the 18th century, machinists have been cussing him. True, the world as we know it couldn’t exist without screw threads, but that doesn’t make cutting them any easier.

Compared to other turning operations, single-point threading is slow, requiring a number of passes to remove a relatively small amount of material. In addition, those threading tools are prone to chipping and premature failure because of the high cutting pressures involved, and programming must produce a synchronized dance of spindle rotation and movement of the X and Z axes.

When it comes to making orthopedic bone screws, single-point threading is about as difficult as it comes. Their unique thread forms are often much wider than their V-thread cousins, leading to chatter during machining. Length-to-diameter ratios can be up to 10:1 or higher, making deflection and taper a problem. In short, bone screws are a challenge to produce.