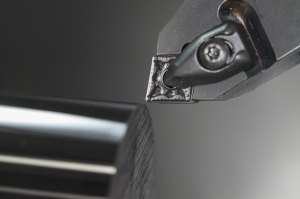 Machine shops make tooling every day. Fixtures are built, chuck jaws bored, vise jaws milled. Why not add indexable carbide inserts to that repertoire? Contrary to popular opinion, inserts aren’t made by Santa’s elves in the off-season. If you’re feeling adventurous, just follow these easy step-by-step directions and your shop will soon be shaving big bucks off its cutting tool budget.

First, you’ll need some tungsten. China or Russia’s a good place to shop for it, but Canada’s no slouch either, ranking third in the world’s tungsten production. Bring warm clothes, though: most Canadian tungsten is found in the Yukon. Once there, you might be lucky enough to mine some tungsten in its pure metallic form, but most is extracted from tungsten oxide, and requires additional processing.

Once you have a big pile of tungsten ore, you’ll need a ball mill to process it, a heavy-duty machine capable of grinding those rocks into dust finer than flour. That’s an important point, because the tungsten powder used in carbide inserts is made of particles just a few microns across.

Now that you have a suitable quantity of ground tungsten, it’s time to carburize it. Tungsten carbide is nearly as hard as diamond, but pure tungsten—that whitish rock you just dug out of the ground—is malleable enough to be drawn into filaments for incandescent light bulbs. It’s only through carburization that tungsten “mans up” into tungsten carbide.

The carburizing process begins by mixing tungsten powder with graphite. If you have a few thousand old pencils lying about, you might sacrifice them for their leads, otherwise you can buy graphite powder online for several hundred dollars a kilo. Don’t get any on your hands though, and be careful not to breathe it in. It’s nasty stuff.

You’ll also need a furnace, one capable of 1,600° C. Place the tungsten/carbon mixture on a ceramic pizza stone, stick it in the furnace, pump in some hydrogen and take a long lunch break. By the time you return, the graphite—which is really just a form of carbon—will have been “taken up” by the tungsten, atomically binding it to the tungsten particles. Tungsten carbide is born.