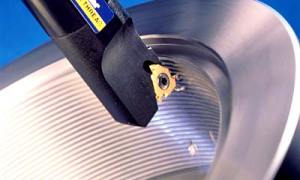 The development of the first modern, industrial screw-cutting lathe occurred in the late 1790s. The man most directly responsible for it was a British toolmaker named Henry Maudsley, who also designed the world’s first bench micrometer.

Throughout history, successful thread cutting has relied on the same basic principle: synchronize the spindle’s rotation with the movement of a thread-shaped cutting tool. This is accomplished with a mechanical lead screw and follower on a manual engine lathe. With a CNC machine, computer-controlled servodrive systems perform the same task, albeit much more efficiently.

You need more than a lathe – manual or CNC – to cut a thread. Tooling, as with any machining process, is a big part of thread cutting.

A threading tool can be as basic as a piece of HSS ground to the shape of the thread profile you wish to cut. For most jobs, of course, an indexable carbide insert is a better choice.

One of the cheapest and most generic inserts available – the so-called utility insert – is a cost-effective choice for less demanding threading tasks. A utility insert is a double-sided, negative-rake threading tool that features four cutting edges for the price of two. But this apparent economy is negated by how the insert is applied.

In order to have four usable edges, the insert is negatively set in the holder. A threading insert tends to be inherently weak because of its unsupported cutting edge. That, coupled with the negative cutting angle, means a utility insert has a much greater tendency to chip than its single-sided cousins. This is especially true when cutting harder materials like stainless steel.