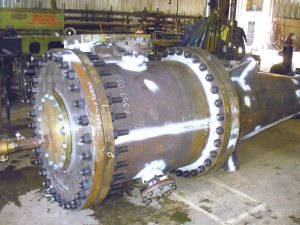 Sean Reid may like to go home at night, but that doesn’t mean he’s afraid to work long days. As president of Mulgrave Machine Works Ltd. (MMW) in Mulgrave, NS, Reid does whatever it takes to get the work out the door and make his customers happy. It’s something he learned from his father.

In 1969, Reid’s dad and several business partners opened Mulgrave Machine Works. They had a vision of servicing the area’s burgeoning oil and gas industry, as well as pursuit of work with nearby shipbuilders, mining companies and pulp processors. The business was successful, and Reid purchased the company in 1984. Unfortunately, he passed away just seven years later. His son Sean has been at the helm ever since.

Although MWW continues to serve the industrial base on which it was founded, it has since carved a special niche for itself. “Our name might indicate otherwise, but we are first and foremost a metal fabricator,” Reid says. “We do a lot of custom plate forming, structural steel, that sort of thing. Yet we’ve also developed a reputation in the pressure vessel business. We’re certified by the Canadian Welding Board and ASME accredited for the manufacture of unfired pressure vessels.”

Hanging alongside those certifications is an ISO 9001:2008 plaque, something Reid’s father would be proud of. He’d also be proud of the new facility his son built—nine years ago, MWW moved to a 3,716 sq m (40,000 sq ft) building, four times larger than the original facility. “The move afforded us the opportunity to manufacture multiple units at once, rather than one at a time,” Reid says. “It increases our activity rates and our competitive advantage.”