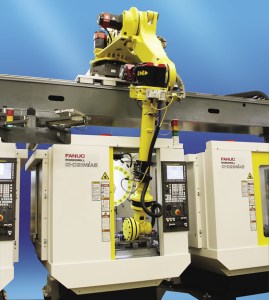 Humans love to automate things. Since the day some prehistoric farmer slipped a harness around the neck of an unsuspecting animal, people have striven to reduce their manual efforts and improve the efficiency of their work. In manufacturing, starting with the 19th century’s first steam-powered lathes, automation technology has evolved to the point where lights-out machining is common, and labor costs are less of an issue.

One machine tool historically passed over for parts-handling and probing automation has been the vertical machining center. Unlike their horizontal cousins—most of which are equipped with built-in pallet changers, rotary tables and large tool magazines that make them ideal for automated machining—VMCs, as a rule, are basic affairs, suitable for low-volume work and a limited range of workpiece sizes. Walk into most shops and the sexiest thing you’ll see on a VMC is an indexing table or a pair of vises.

VMCs have one big advantage over horizontals, however—they’re inexpensive. Consider that a typical horizontal costs $200,000, perhaps far more. A decent vertical is half that price. Bolt on an aftermarket pallet changer and even a basic VMC gains much of the automation capability seen in its more expensive counterpart.

Mike Cayley Jr., vice president of manufacturing for Midaco Corp., Elk Grove Village, Ill., said the number of shops taking this route is on the rise. “We’re selling pallet changers to just about everybody.”

The biggest advantage to pallet changers, Cayley explained, is increased uptime. The machine is not sitting idle while the operator wrangles with a vise handle or blows chips off a fixture prior to loading a workpiece. For $40,000 and a day or so for installation, Midaco will be happy to fly a technician to your site, cut a big hole in the end of a VMC and bolt on a shiny new pallet changer.

The result is a device that can automatically swap an entire machine table’s worth of parts in a few seconds via an M code sent by the control. This frees the operator to tend other equipment, check parts, prepare the next job or load the next pallet. And increasing spindle time by just 1 hour per day at a $75 hourly shop rate means a 2-year return on investment. But, as Cayley pointed out, many shops see ROI much faster than that by eliminating several hours of daily downtime, depending on the application.