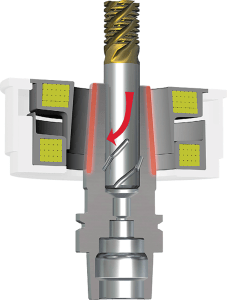 In the winter of 1918, Carl A. Bergstrom opened the Weldon Tool Co. in Cleveland. Working from his shop atop the Blackstone Building, he developed a new kind of endmill, one with a 30° helical flute. The thing cut like crazy. Yet Bergstrom quickly realized that his toolholder lacked the gripping power to hang onto his cutting-edge endmill, as the darned thing kept spinning right out of the holder. In a fury, he grabbed that newfangled tool and ground a flat spot on its side, giving the toolholder’s clamping screw a place to bite into. Bergstrom had invented the Weldon shank.

The old toolmaker has long since turned to dust, but his invention lives on. For decades, the Weldon shank has taken first place in the contest for raw gripping force. Until now, that is. Brendt Holden, president of tooling provider Haimer USA LLC, Villa Park, Ill., aims to retire Bergstrom’s brainchild to a well-deserved place in the milling hall of fame with the development of Safe-Lock, a system that utilizes a no-fail clamping technique.

“Weldon-style endmill holders by their very nature push the cutter off center,” Holden said. This creates runout and drastically reduces tool life. Worse, even the rugged Weldon flat is prone to failure under modern cutting conditions—people weren’t hogging huge blocks of titanium in Bergstrom’s day or machining aluminum at 600 ipm and 20,000 rpm.

But hold on. The Weldon flat may not be history. Other toolholder manufacturers, including Iscar Metals and Rego-Fix Tool, have developed hydraulic and press-fit toolholders that use new technology, in conjunction with the Weldon flat, to provide antipullout characteristics. While suppliers may debate the benefits of each system, machine shops have a growing list of choices for securing their endmills when performing extreme milling.